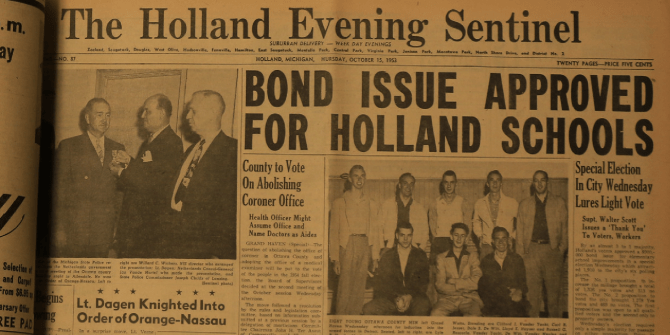 The Holland Sentinel is a daily newspaper and is available on microfilm at Herrick from 1912 until the present. Although it began publication before 1912, there are no earlier papers available. There are some partial indexes to both papers.

The Van Reken Newspaper Index covers both the Holland City News and the Holland Sentinel from 1880-1990. It was compiled by a local historian, Donald Van Reken, and covers mostly Holland businesses, schools, churches, and other subjects, but not many names. The earlier years of the index contain more information than the later years. The Van Reken Index is available digitally through the Hope College Digital Commons and in print at Herrick Library in ten year increments. Herrick Library has compiled some indexes in recent years, and it is also possible to check for information on the Holland Sentinel website from 1997 to the present in their archives section. There are also obituary indexes available at Herrick, both in print and online.

The Van Reken Index was created by the historian Donald Van Reken, who has written many books about Holland’s history and worked at the library for many years. It is a partial index to the newspapers – it does not index everything. It is available in book form on the microfilm cabinet in large blue binders, one for each decade from 1880-1990. The later years have less material. It is also available online on the Hope College Digital Commons website. It indexes both the Holland City News and the Holland Sentinel. The Van Reken Index contains information on the Holland area, including but not limited to businesses, schools, churches, buildings, railroads, etc. Some names are also indexed, but not vital records, such as births, deaths and marriages.

*For more information on these papers go to the website for the Joint Archives of Holland http://hope.edu/jointarchives, choose Collection Search, then Newspaper Collections.

If you have more questions, check with the library's Information Desk for help. Happy searching!