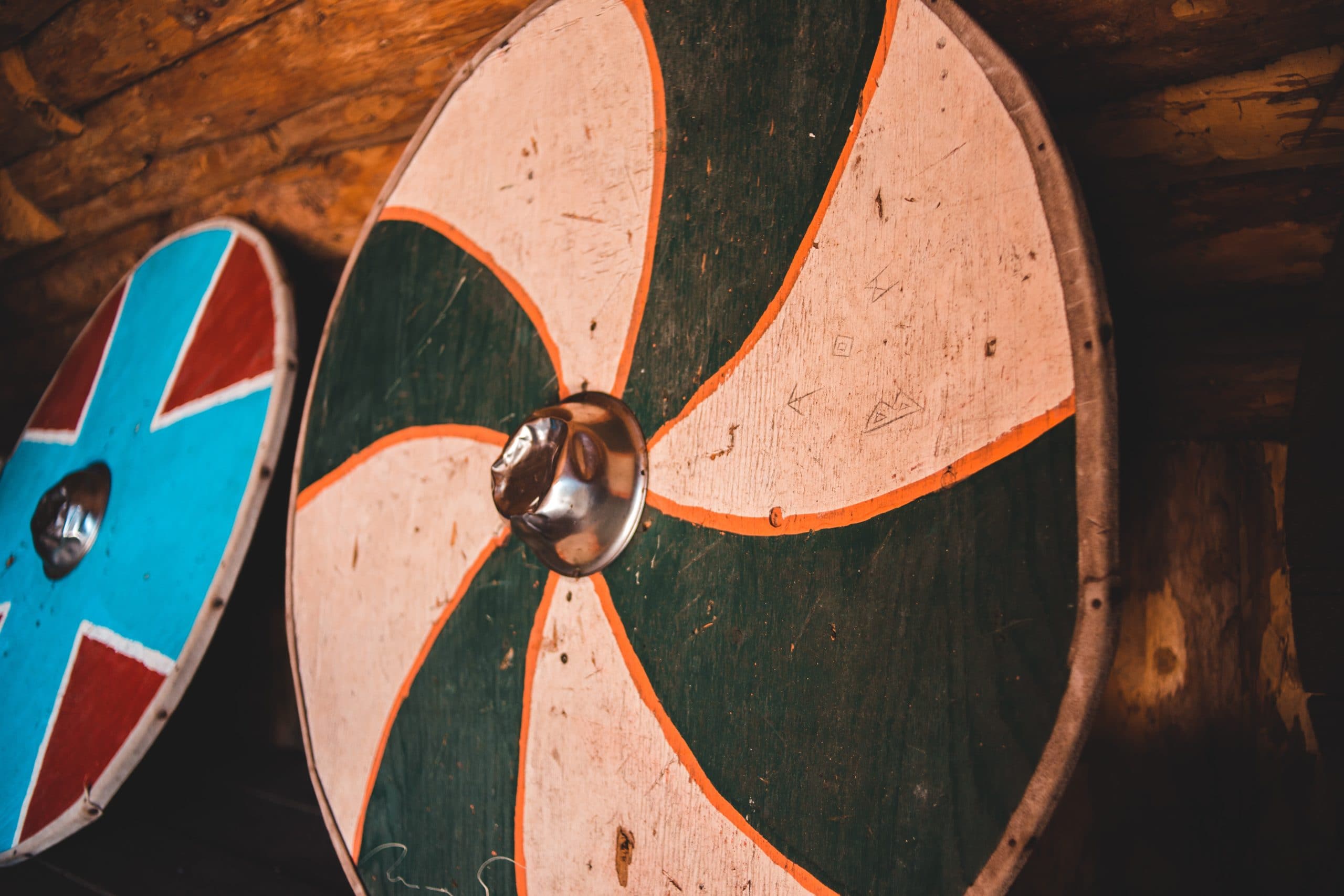 Have you ever dreamed of drinking a warm mug of ale in a mead hall? What about sailing the Scandinavian seas on a dragon-headed ship? Probably not, since doing those things would have also required explaining to a lot of people that you don't wear a horned helmet, being a brutal pirate, and surviving sub-zero temperatures by huddling in a windowless longhouse with your cow.

But it's still fun and fascinating to think about what life might have looked for Vikings and the people that they came from, and I'm not the only one that thinks so; many great works of historical fiction and fantasy draw inspiration from these Norse warriors—check some out below!

Want to learn more? Come to our historical talk about Viking combat on December 5 at 6:30pm, presented by Jerry Berg of the Swordsmanship Museum and academy!

Let's start with the one everyone's expecting. Bernard Cornwell's Last Kingdom series (and TV show of the same name) is often the first thing people think of when they hear "Viking fiction." And with good reason; this long-running and recently concluded saga has everything fans of epic historical fiction look for: political drama, family struggles, epic battles, and deeply human characters. If you're looking for a long series to sink your teeth into, this might be the place to start.

On the other end of the spectrum, here's a historical fiction series that very few people (at least, very few who don't read manga) have heard of. This meticulously detailed comic series tells the life story of Thorfinn, the son of an Icelandic farmer who quickly becomes caught up in political events that will change the world his knows. With revenge, politics, larger-than-life characters and action, Vinland Saga is excellent for fans of comics or action-adventure series.

The Shadow of the Gods

But maybe you want something just a bit more epic in your Norse-inspired reading. John Gywnne's Bloodsworn trilogy might have everything you need. The first novel follows three warriors on separate paths—a princess seeking to sever her future from that of her family, a former slave looking to forge a new life after his escape, and a desperate mother on the trail of those who wronged her—whose fates become more and more entwined by forces outside of their control.

The Last Light of the Sun

Guy Gavriel Kay is known for his sweeping, lightly magical books in alternate versions of historical places and times. This let him play around in the historical context with misrepresenting the actual political events of the era. The result is usually epic, brutal, and full or intricate historical detail. In The Last Light of the Sun, Kay fictionalizes the Norse and Celtic cultures of the 800s CE to dramatic effect.

A reimagining of some of the world's most ancient stories, The Witch's Heart reimagines the life of Angroboda, the lover of the trickster god Loki (no, not that Loki). In Gornichec's hands, this story of capricious gods and monsters is molded into one about family, choice, and resilience. Great for fans of Circe and other female-focused mythic retellings

If you're more in the mood for a retelling the hews more closely to the source text, try Norse Mythology, Neil Gaiman's take on these classic tales. As a self-professed lover of all things mythological (and Norse mythology in particular), Gaiman spins about the epic tales of gods, monster, and other legendary characters with great affection and craft.

Want more? Check out more Viking and Norse-inspired fiction below!