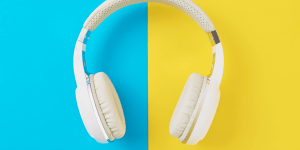 When I first moved back home from college, I found myself loving this album. This was Fun's only hit record, but it is chock-full of great songs. The titular "Some Nights" and the super popular "We Are Young" are the songs people would probably know best, but I love the song "Carry On." It is a track of full of hope and encouragement, and while running, this was the kind of song that kept me going, even when I wanted to stop.

Released in 2006, Stadium Arcadium brought the Red Hot Chili Peppers back into the spotlight. A solid rock album back to front, with such classics as "Tell Me Baby," "Readymade," and "Especially in Michigan." "Snow (Hey Oh)" was far and away their most prominent track, however, and it is easy to see why once listened to. If you like alternative rock, you will enjoy this album.

"Feeling Stronger Every Day" - Chicago (The Very Best of: Only the Beginning)

My dad was not a fan of 70s rock once The Beatles broke up, but one band I learned to love through him early on was Chicago. Chicago was not your typical rock band in that they included a horn section which gave it a more ensemble feel. I'm not usually a "Best Songs on an Album" guy, but I thought they really nailed it with this one. You get so many classics that it is hard to quantify. Personal favorites of mine include "25 or 6 to 4," "Does Anybody Really Know What Time It Is," or "Saturday in the Park" really illustrate some of the best of Chicago. "Feeling Stronger Every Day" really connected with me, and I love how it changes musically two-thirds of the way through. If by chance you haven't listened to Chicago before, please take a listen and enjoy.

The Very Best Of: Only the Beginning

"Blinding Lights" - The Weeknd (After Hours)

I don't know why, but I had never really listened to The Weeknd until this song dropped. Yes, I had heard of him and knew a song or two. However, this hit made me tap my foot and dance in my car when this album came out in 2020. This song was so immensely popular he even did the halftime at the Super Bowl. The Weeknd isn't your typical artist, who eloquently utilizes both R & B with electronica. Some may say this isn't his best album, but I think that people should have a listen to a song that swept the nation more recently.

Since I've started this blog, I've shied away from holiday thematic songs. However, this month I make an exception! I love most genres of music, and disco/dance/funk are some of them. I just love how songs during this era, or from this genre, just get you out on the dancefloor. With Thanksgiving around the corner, this song to me encapsulates what we should be focused on during this time: family. Have some turkey, throw up this track, and show grandma how to kick it!