It's 11PM on a Tuesday, but I can't sleep yet—I have an embroidery project to finish and it's gonna be a while.

So naturally I hop on Libby for an intriguing audiobook to keep me occupied. On the home screen, I tap "available now" and then limit to audiobooks.

And then, my friends: I hit the jackpot!

I see that a copy of Agatha Christie's classic And Then There Were None is ready to check out. And so I do! And lo and behold, it's narrated by Dan Stevens of Downton Abbey, Beauty and the Beast, and The Guest fame.

Incredibly suspenseful, And Then There Were None tells the story of a group of strangers mysteriously invited to a solitary island mansion off the stormy coast. Characters are murdered one by one according to a nursery rhyme and the remaining guests race to find the killer among them. Many thriller writers copy this concept today, but no one does it better than the Queen of the Murder Mystery, Agatha Christie:

And Then There Were None

Listen to a sample here!

I was delighted by how well Dan Stevens' voice evokes the mood of the books he reads. A professional actor's excellence at audiobook narration should not come as a surprise, but he's so suave. So classic. So... British. Perfect for cozy whodunnits. To see what else Dan Stevens has narrated that's available on Libby, I tap on his name: 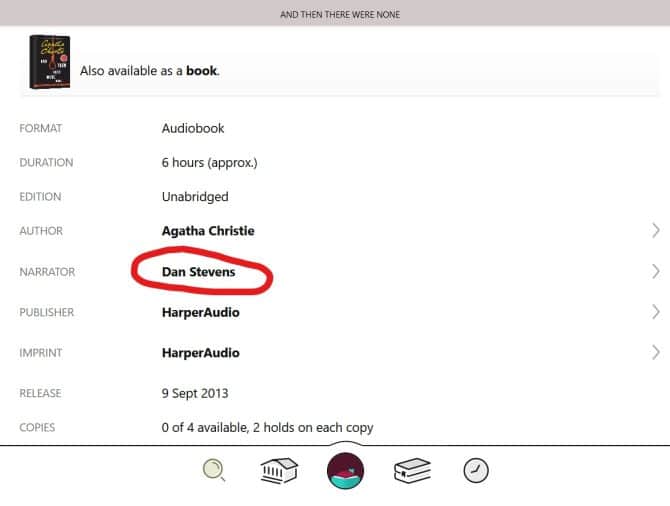 And there's an entire list! Perfect for my next embroidery project.

Murder on the Orient Express

(And if you prefer Hoopla, he's got a bunch there too! Enjoy!)