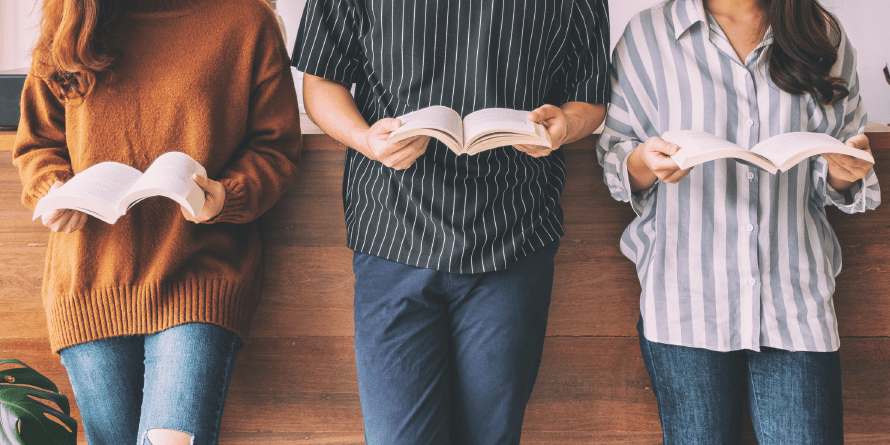 I am in two book clubs and both of them are organized in a different way. In one of the book clubs at our September meeting we choose books for the next year. We all bring a few suggestions, talk about them, and then vote for our favorites. In the other book club we choose the book for the next meeting every month. One of my favorite things about being in a book club, besides meeting with friends, is reading books that I normally would not read. Some of the books chosen I like, some I don’t, but I usually make it through the book, even if I don’t like it. There have been a few times when I just stopped reading the book, but that doesn’t happen very often. One of my book groups started as a mother-son book group, so many of the books chosen are ones I don’t normally read, most of them fantasy and science fiction. The sons are now grown up and gone, so now we choose different books!

The library has two book clubs right now, Random Readers and the Mystery Book Club. Random Readers meets on the first Monday of every month, and the participants choose both fiction and nonfiction. The Mystery Book Club obviously reads only mysteries and they meet the first Tuesday of each month. Both groups meet in the Main Floor Meeting Room on the main floor of the downtown library.

The library also has book bags for book clubs. We have 188 titles in the collection right now. Each bag has twelve books, and you can reserve the bags ahead of time for your group. There is a variety of different titles, both fiction and nonfiction. Bags go out for six weeks.

I have put together a list of some of the books I have read in my books clubs and really enjoyed along with short descriptions. Some are fiction, some are nonfiction. Some of these are also available as a book bag. Maybe some of these will sound good to you, too.

Battle Hymn of the Tiger Mother

This is the story of a Chinese mother who describes how she raised her two daughters. I thought it was great for discussion, especially for mothers of young children, and even adult children. It was interesting to read how the parenting style of some (not all, I am sure) Chinese mothers is quite different and much stricter than most of the mothers I knew when my children were young.

Killers of the Flower Moon

This is a fascinating but also chilling account of how several of the Osage Indians in Oklahoma, who were wealthy because oil was discovered on their land in the early 1900s, were murdered to get their land and their money. It details how the case was solved by the newly formed FBI.

In 2009, a young American musician named Edmund Rist, who was living and working in Britain at the time, stole many rare bird feathers from the British Museum of Natural History. Edmund was obsessed with the Victorian art of fly-tying and wanted the feathers for his collection.

The Devil in the White City

The year 1893 was the year of the Chicago World's Fair. In this book the author talks about two different men: the architect Daniel Burnham, who coordinated the construction of the fair, and the serial killer Herman Mudgett, who terrorized Chicago at the same time.

After losing the Presidential election in 1912, Theodore Roosevelt traveled to South America and explored the Amazon River with a group that included his son Kermit. They faced very dangerous conditions and Roosevelt nearly lost his life on the voyage.

In this book the journalist Cokie Roberts writes about the lives of many women during the American Revolution, such as Abigail Adams, Dolley Payne Madison, Deborah Read Franklin, and more. An interesting read for book groups.

Bryan Stephenson is a lawyer and the founder of the Equal Justice Initiative in Montgomery, Alabama. In his book he tackles the treatment of the poor on death row and discusses one case specifically where a black man named Walter McMillan was sentenced to die for a murder he did not commit. Bryan also discusses racial profiling and the high incarceration rate in America. A very powerful book.

J.D. Vance grew up in poverty in Appalachia and Ohio, raised mostly by his grandma. He managed to graduate from college, then Yale Law School, and now is a lawyer. His former professor at Yale, Amy Chua, author of Battle Hymn of the Tiger Mother, encouraged him to write his memoir.

This is the title of both a fiction and nonfiction book. The nonfiction title is by David Laskin, while the book by Melanie Benjamin is a fictional account of the tragedy. Both are about the blizzard on January 12, 1888, on the prairie which killed hundreds of people, many of them children. The day started out warm, so many children went to school without their heavy winter clothing and a blizzard came up during the day. Many children died trying to get home and many others died trying to get their children home. It is considered the deadliest blizzard on the United States prairie.

The Sweetness at the Bottom of the Pie

This is what I would call a cozy mystery. It stars Flavia De Luce, a precocious eleven-year-old girl who lives in an old mansion in England in 1950. She discovers a dead bird on her doorstep, then a man dies in the family garden and her father is accused of murder. It is Flavia's job to solve the mystery.

In this book Jacob Jankowski, who is in his nineties and is living in a nursing home, remembers his life as a young man during the Great Depression. He had a job taking care of animals for this circus, and became friends with Marlena, a star at the circus, and Rosie the elephant.

I have read many books by Kristin Hannah, and liked them all. This one is a World War II historical fiction book about two sisters living in France during the war, how their lives are changed during the war, and how they survive.

The Curious Incident of the Dog in the Night-time

Christopher is a fifteen-year-old high-functioning autistic boy who lives with his father. When his neighbor's dog is murdered, he decides he must solve the murder. What I liked about this book is the way the author portrayed Christopher's thoughts and feelings as he goes about trying to solve the mystery. I thought the author did a great job describing how Christopher thought and how difficult life must be for an autistic person. I really enjoyed the book.

This book is told by Kate Morrison as an adult, remembering her life as a child after her parents were killed in a car accident, and her two older teenage brothers were suddenly thrust into the role of taking care of six year old Kate and her younger sister. A tragedy involving the neighborhood family affected them all, and Kate recalls the events that happened when she was a child. The story takes place in Northern Ontario. This book is one of my all-time favorites.

This book has also been made into a movie. Louisa takes a job taking care of Will, who was a very wealthy extreme sports enthusiast, but an accident has left him a quadriplegic—not able to move any part of his body below his neck. She has to deal with his moods and tries to convince him that life is still worth living.

The Book Woman of Troublesome Creek

This historical fiction book takes place during the Great Depression in Kentucky, where Cussy Mary Carter, who is a traveling librarian with the Pack Horse Library Project, delivers books on horseback to people in remote areas. She has the rare blood condition methemoglobinemia, which causes the appearance of blue skin, so is considered an outcast in her community.