Holland’s first library was established shortly after Dutch settlers arrived in West Michigan in 1847. In the late 1800s, the library was located at the old Fire Department at 108 East 8th Street. The librarian was George Sipp, and he took the position with the understanding that his wife would actually do the work. Mr./Mrs. Sipp served until 1897. When the Sipps resigned, the next librarian was Miss Jennie Kanters. She was a graduate of Hope College and attended the Ladies Seminary at Rockford College in Rockford, Illinois. During these years, the library moved to the second floor above Model Drug Store on 8th street. In 1911, the new City Hall was built and the library moved to its next home on the second floor of City Hall. In 1918, Miss Kanters died and Miss Dora Schermer took the position as director of the library. 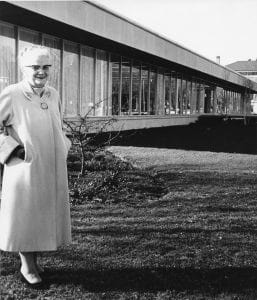 In 1953, Mrs. Hazel Hayes was hired as Holland’s first professional librarian. Miss. Schermer stepped down as director but continued to work until her retirement in 1964. Mrs. Hayes was previously the head librarian in Clinton, Indiana. A requirement for her position there was a master’s degree in library science so she obtained one, receiving her MLS at the University of Illinois. She was over fifty when she began her training to become a librarian.

When Mrs. Hayes came to Herrick, she began exploring ways to help Holland obtain a new library. She started a successful summer reading program for children to encourage them to use the library. She encouraged the children to start a “Million Penny Campaign” to start generating funds for a new library. In 1956, she started a Saturday morning program where children got together to think of ways to earn money for the library. Children held auctions, did chores, had carnivals and backed goods sales, and tried to come up with more ways to earn money.

In 1958, the Woman’s Literary Club of Holland began to encourage donations for a new library. Mrs. Hayes continued to look for donors. One day, when she was dining in a Holland restaurant, she overheard two men talking about a man named Ray Herrick who wanted to do something for the city of Holland. Mrs. Hayes returned to the library and looked through the list of library donors. She found that he was the 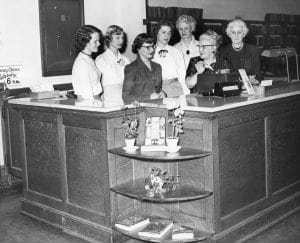 owner of Tecumseh Products, located in Tecumseh, Michigan. He had lived in Holland as a child and had fond memories of his years in Holland. On January 20, 1958, she wrote a letter to him, asking if he was interested in helping Holland obtain a new library. He wrote back and said he was interested but did not want his name revealed until he gave permission. Months of secret planning followed before Ray Herrick was revealed as the donor.

On July 24, 1958, the Holland Evening Sentinel wrote “an anonymous donor has offered a gift of $300,000 to build a public library for the City of Holland." The city purchased land for the library and construction began. Ground was broken for the new library in 1959, and Herrick Public Library opened to the public for the first time on May 9, 1960.

Hazel Hayes was director at Herrick Library for thirteen years, retiring in 1966. She definitely deserves much of the credit for Holland’s present library.