Interested in reading manga? Don’t know where to start? Read on to learn about some of the most popular genres and series available at your library! 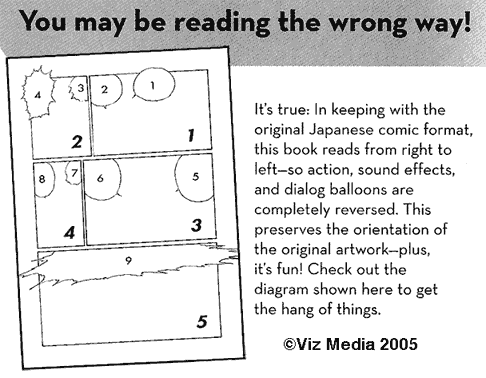 Some people find manga intimidating because it’s read backwards from most English-language comics (right-to-left and starting at what would be the “back” of an American book). Once you get the hang of the panel order, your brain will be able to switch back and forth no problem—check out the diagram to get started!

Once you start looking into manga, you’ll come across age- and gender-defined genres. Some of these genres are described below, but don’t feel like you can’t or shouldn’t read a genre just because you aren’t its target audience (the categories are pretty flexible anyway). It’s much more important that you find a story and art style that resonates with you.

Literally “children’s” manga, kodomo-muke is Japanese comics for kids, usually under the age of ten (but don’t let that stop you if you’re older!). These series are usually self-contained in short chapters and many feature characters from popular culture, like Pokémon and Hello Kitty.

Shōnen manga are series primarily targeted at teen boys and is what many non-fans think of when they think “manga” or “anime.” Shōnen series tend to be full of action and emphasize friendship, often with large casts of colorful characters and exciting set pieces. If you’ve ever watched an episode of Dragon Ball, you’ve experienced something in the shōnen genre.

Series that fall into the shōjo genre are those that are marketed towards teen girls. They tend to have emotive, expressive art styles and often focus on school stories (sometimes realistic, sometimes magical) and romance. Shōjo manga can be comedic, dramatic, or a bit of both.

Seinen manga features stories aimed at an older male demographic than their shōnen counterparts. Its mysteries tend to be darker, its action more violent, and its themes more ambiguous. But not all seinen is blood and guts! Workplace and college comedies can also fall into the seinen genre.

Manga produced for older teen girls and women is called josei. Josei series tend to deal with realistic life situations and relationships, unlike the more idealized romances common in shojo manga. While these comics can deal primarily with family life (either in modern day or a historical setting), many are college or workplace stories.

While these categories may be helpful determining what sort of manga you want to start with, they’re not absolute. Contact Annaka or Amanda if you’re interested in a specific recommendation or check out the list below for more titles. Happy reading!

New to manga? Check out these titles to get you started!